Skip to main navigation Skip to content Skip to footer

The advanced metrics are Sequencing (and Kinematics Sequencing), Efficiency, and Deception. These metrics are often studied in conjunction with external data, like velocity, spin rate, workload, or intensity level. Understanding the basic and intermediate metrics provides a great foundation for interpretation of the advanced metrics. Unlike the basic metrics, these values are not as simple as “more is better”. 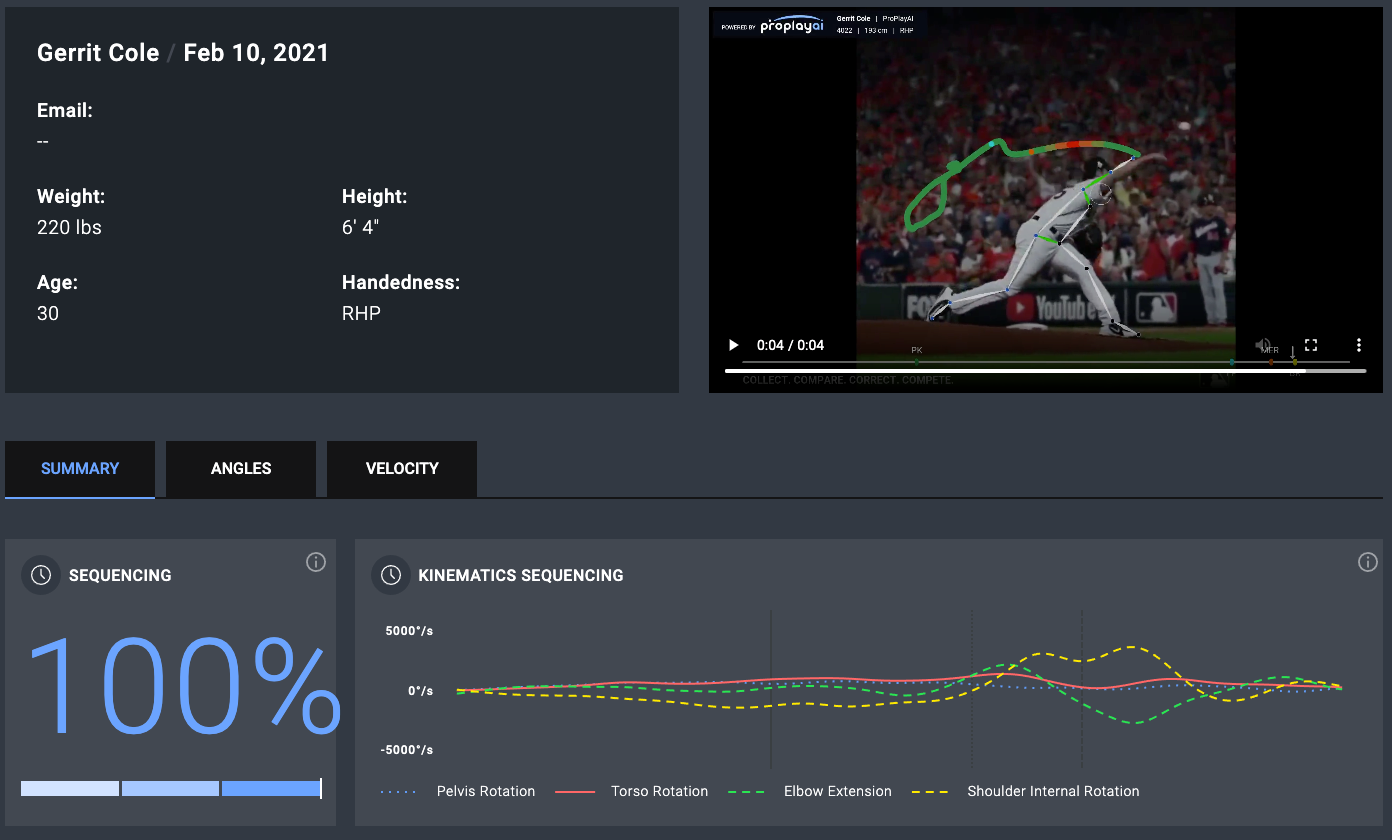 The advanced metrics are Sequencing (and Kinematics Sequencing), Efficiency, and Deception. These metrics are often studied in conjunction with external data, like velocity, spin rate, workload, or intensity level. Understanding the basic and intermediate metrics provides a great foundation for interpretation of the advanced metrics. Unlike the basic metrics, these values are not as simple as “more is better”.

Kinematics Sequencing (and Sequencing) is a commonly studied biomechanics concept broadly describing how energy is transferred from the lower half to the ball, along a series of body parts often referred to as the kinetic chain. In theory, the optimal kinetic chain results in a kinematics sequence of the force from the lead leg transferring into the pelvis, causing a peak rotational velocity of the pelvis, transferring energy next through the hip-to-shoulder separation, and a peak rotational velocity of the upper body and trunk. This energy is passed along to the arm, and a peak extension velocity of the elbow is followed by a peak internal rotation velocity of the shoulder. The Sequencing score represents how many of the components of the kinetic sequence are in the proper order – with a 100% being a perfect score with the sequence described above. If the pelvis came first, followed by the trunk, but then the elbow and shoulder – that would be a 50% score.

Throwing harder exposes the body to higher forces, and a higher torque on the elbow. However, how you move can cause one pitcher that throws 95 mph to have higher forces on their elbow compared to another pitcher throwing the same velocity. The Efficiency metric in PitchAI represents the ratio between arm speed and torque. In our database of close to 300 professional and NCAA Division 1 pitchers, we know what the average ratio is for all pitchers – in the PitchAI App, we convert that value to a percentile. This produces an efficiency score in units of 0-100 – an efficiency of 95% means that this pitcher is more efficient than 95% of the pitchers in our database.

Pitching performance is often about velocity and mixing of pitches – a proper sequence of fastballs and offspeed pitches can keep hitters off balance. The ability for a pitcher to make it difficult on hitters to pick up the ball out of the hand is a huge advantage. The Deception metric represents the amount of time, in units of milliseconds, a hitter would be able to see a ball from behind the pitcher’s body. Of course, throwing with higher velocities, better tunnelling, and taking advantage of seam shifted wake could also take advantage of these factors.

Dr. Michael Sonne is the VP of Research and Innovation for ProPlayAI, a company focused on measuring and describing human motion. Mike is also the research director for the Baseball Development Group in Toronto, Canada, as well as an adjunct professor at Brock University. At Brock, Mike and his graduate students focus their research on better understanding the measurement and analysis of pitching mechanics. Mike has also written about pitching biomechanics for The Athletic, Hardball Times, FanGraphs, and Baseball Prospectus. Mike’s workload metric, Fatigue Units, is widely used in the MLB as a better physiological representation of pitching workload, and the metric was recently included in the Motus Baseball app.

Reed Hanoun is a serial entrepreneur with a passion for problem-solving and innovation. Throughout his career, Reed has developed innovative technologies in the health and well-being space, which have enjoyed widespread adoption and success both for individuals and organizations. For more than 25 years, physicians, physical therapists and health care providers have adopted his rehabilitative solutions to treat work related injuries. Today, Reed wants to make a catalyst for change, using data, technology, and artificial intelligence to make an impact in the field.

Nate Pearson was a 2017 first round pick for the Toronto Blue Jays, and since that time he has continued to rise up baseballs top prospect lists. Nate comes to professional baseball via Central College of Florida, a Junior College which prioritized his player development. Nate actively looks to get the best out of every training and game day, using whatever technology is available to aid his development. Nate joins ProPlayAI as a founding member, where he is helping develop insightful protocols and metrics to guide simplistic adoption for every pitcher that has a dream of making it to the games highest level.

Ryan has an undergraduate degree in Kinesiology and is currently a graduate student in the Biomechanics Lab at Brock University. He was a varsity pitcher for Brock in the Ontario University Athletics for 5 seasons and most recently pitched in Ontario’s most elite baseball league, the Intercounty Baseball League. In his prime, he hit 88 mph on the radar gun. Now retired from Baseball, he’s integrating all that practical experience with a passion for biomechanics to better understanding pitching mechanics and injury.

Dr. Mike Holmes is a Canada Research Chair in Neuromuscular Mechanics and Ergonomics. Currently an Assistant Professor at Brock University, Holmes runs the Neuromechanics and Ergonomics research laboratory where the primary research focus is occupational injury mechanisms of the upper body. Beginning baseball research in 2018, the focus was on mechanical differences between professional pitchers who have and have not had UCL reconstruction surgery, then using this data to develop a posture-based tool to evaluate pitchers at front foot strike.

Dr. Colin McKinnon is an applied biomechanics researcher at ProPlayAI Inc. His research, including his graduate degrees (MSc and PhD) from the University of Waterloo in Kinesiology, has centered around human performance, workload guidelines and injury risk reduction during occupational and high performance activities. A sports addict his whole life with a personal background in high level contact sports (football, hockey and rugby), Colin is now building his biomechanics skill set into analysis of pitching mechanics with PitchAI.

Born and raised in Tampa FL. Jason was a 1st rd draft pick by the Texas Rangers in the 1997 draft. He played parts of 4 years in the Major Leagues with the Rangers, Rockies, Dodgers, Rays, and Reds. He currently works for Excel Sports Management and has complied 10+ first round picks in the past 9 years including Nate Pearson. Jason is married to his wife Ellen and has 3 kids.

Casey Mulholland is the founder and lead developer of KineticPro Performance in Tampa FL. Casey’s playing background has lead him around some of the top organizations and universities in the game. Those include The Los Angeles Dodgers, The University of South Florida, The University of Mississippi and IMG Academy. Through KineticPro Casey’s work has been progressive building advanced platforms in workload management and utilizing some of the games top technology. Training some of the top arms in the game Casey’s skill set and experience offer a unique combination to athletes around the world.